Find out what self-regulation looks like and how it is supported through rich play experiences. See children feeling in control, setting their own challenges and taking appropriate risks in an environment of warmth.

Ellen’s determined. She wants to learn to walk and needs something to pull herself up on. It takes time and after a number of weeks her muscles have matured and she finally manages to pull herself up. She needs to repeat things over and over again.

Lucia’s not easily put off by struggle or failure, she wants to become competent.

Arthur wants to be able to push the chair up the steps and master this tricky skill. Children like to set themselves challenges. ‘uh oh’ His brain is aware he needs to think about the strategy.

These very young children are learning difficult new physical skills in a playful way that’s under their own control. They’re focused on achieving their goals. They aren’t put off by the daunting task ahead of them or failure. They need to repeat things over and over until they’ve mastered them.

Niaz is highly motivated and is becoming very confident about the use of his body. His muscle strength is being built up and he’s becoming able to coordinate himself very well.

What’s good about his play is that he’s learning for himself how to develop his physical skills. This is called self-regulation, and is intrinsic to becoming independent as children become able to make their own decisions. Self regulating children learn because they want to, the motivation comes from with in themselves. It’s not dependent on external praise. This physical play is open ended and Niaz is setting his own goals. He’s constantly setting himself challenges. He’s developing what’s been described as a can do attitude. Persisting and trying again and again and not giving up are elements of this. Self regulation and a can do attitude are about children having the capacity to regulate their emotional response to difficulty.

This is difficult for Niaz but he doesn’t give up. He’s constantly trying different ways of placing his feet using his arm muscles as he tries slightly different strategies. Setting your own goals, persisting, finding new strategies and knowing what has worked are all attributes of effective learning.

Niaz is highly motivated here to succeed and achieve his goal. Supporting the development of self-regulation is about helping children understand ‘how’ they’ve learned something in an effective way. Nadine’s praise is specific, helping Niaz be aware of HOW he’s learning and progressing. Research shows how significant the development of self regulation is in becoming an effective learner for life. After trying again and again he’s now more competent and confident to know how to do it.

Seth is also persistent. His bike won’t move easily on the mud. He tries to peddle, he gets off and pulls, still no good, so he pulls from further down to get more leverage. When one thing isn’t working, trying out different ways of doing things is another tool for becoming an effective learner.

During physical play children practice all sorts of learning strategies. It encourages a ‘can do’ attitude as motivation is high, so they set their own goals, concentrate and persist even when things are hard. These children are on their way to acquiring dispositions that’ll be valuable to them in all aspects of their learning. 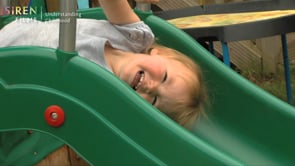 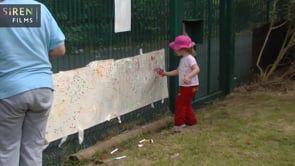 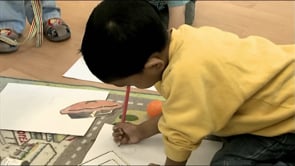