Learning to socialise is an essential part of children’s development. Co-operating with others is a crucial part of being able to work in a group. But what does this look like for very young children? Find out how 20 month old Jaleel likes to socialise in his nursery garden.

Transcript of video – What does early socialising with peers look like?

Jaleel is 20 months old and his home language is French. Like the other children we’ve seen he loves being outside. He’s getting to the stage where as well as playing alone, with adults or in parallel with other children, he’s getting more interested in other’s games. He’s becoming more influenced by the play of the older children and watches their activities. He’s becoming more able physically making it easier for him to join in with their games. Washing the nursery windows with the other children he’s using his whole body, forming friendships and helping with jobs around the nursery.

He joins in with the water fight. Messing around and boisterous play is particularly enjoyed by boys and outdoors is the perfect place for this type of play, which is good for fostering friendships with others.

When Stephen tries to encourage him to put the letter in the post box, Jaleel isn’t interested. When he sees another older child doing it he’s keen to join in, trying out the posting box in his own way. Hmm that doesn’t fit!

Earlier in the day he saw the older children, making music with the pots and pans. Now, with his young friend Willow, who’s 17 months, Jaleel’s trying to use the pots and pans to make rhythm himself. He starts to sing too. Outside you can make as much noise as you want.

Jaleel’s got to the stage where as well as exploring the properties of objects he can use them in a more playful way. He’s realising that he can pretend. The grass in his pan stands for food. He’s confident enough about what the object really is that he can pretend it’s something it’s not. He takes his pretend food to sit by his friend Willow. Karmel encourages their friendship. Communication between them is all non-verbal. He offers Willow some of his food, trying to draw her into his game. While Jaleel is using grass as food in the pan he sees the dinner trolley being wheeled passed. Karmel joins in with the pretence as he puts the lid on top of his pan, extending his pretend game. This pretend symbolic play is still in its early stages and is often brief. Social play is often disrupted by the inability to share at this age.

When he hears Willow getting upset he immediately tries to help by offering her some of his pretend food. 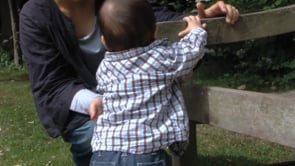 Ko plays in the park 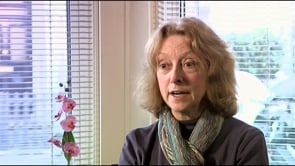 How do children begin to understand the code of language? 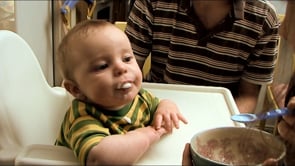