Types of activities, exercise play, body sense, rhythm, confidence, happiness. Physical play, generally referred to as ‘gross motor’ play or exercise play includes jumping, climbing, running, dancing, skipping, riding on bikes, balancing, ball play and so on. See examples of each of these types of activity, and how they develop from young babies to children of 5/6 years of age, are all provided in this section of the film.

Gross motor or exercise play is very common and typically occupies around 20% of children’s behaviour by 4-5 years of age. The evidence suggests it supports the development of whole body and hand-eye co-ordination, is important in building strength and endurance, and, of course, is vital in giving children an early sense of themselves as physically able, the experience of enjoying physical activity and developing physical skills, and so forms the basis for a healthy, active life style. In addition, exercise releases a class of neurotransmitters in the brain called ‘endorphins’ which give us a feeling of well-being and contribute significantly to mental alertness, the ability to concentrate and maintain attention. Ratey & Hagerman (2008) provide an enthusiastic review of the relation between exercise and brain functioning, and state that ‘exercise cues the building blocks of learning in the brain’ and is ‘the single most powerful tool to optimise brain function.’

Head to toe – inner to outer

Maude (2008) describes three principles of physical development. The cephalocaudal principle refers to the fact that development occurs from the head down to the feet i.e. that children develop control of their upper limbs before that of their lower limbs. The principle of proximo-distal development indicates that growth occurs from the centre of the body out towards the extremities i.e. that the central organs are fully functioning at birth but the young child’s hands are not fully formed until they are 5 or 6 years old. The principle of differentiation refers to the development, both within the brain and the body of the young child, from an undifferentiated, global response (eg: to any pain or discomfort) to an increasingly specific response as the child matures. These principles of development each have implications for what we can expect from the young child in development and what are appropriate activities to engage them in to support their developing physical literacy.

This section of the film also contains examples of children’s love of spinning around, being upside down, running and other activities which involve using their muscles to lift, push and pull objects around. These activities relate to children developing their body awareness, their co-ordination and their awareness of their body in space. As referred to in the film, this is termed proprioception, and is a brain function which involves the co-ordination of information from all our five senses and the vestibular system. The latter is located in the inner ear, and comprises two components: the semicircular canal system, which indicates rotational movements and is responsible for our sense of balance; and the ‘otoliths’ which are membranes sensitive to linear accelerations, and which help with eye-head-body co-ordination as we move through space .

Like many systems in the human brain, the proprioception system is dependent upon experience for its fullest development, and physical experiences in early childhood, when the brain is undertaking its major period of growth and structural change, is highly significant in developing these abilities. This is particularly important for children with ‘dyspraxia’, who have difficulties with co-ordination and movement tasks, and who will find many physical activities particularly challenging. These children can be greatly helped in their development of physical abilities by the full range of physical play, and early childhood educators can provide important support in this regard. Drew (2007) and Goddard-Blythe (2012) provide excellent reviews of the nature of dyspraxia and programs of physical activity which are both appropriate for and enormously helpful for children who suffer from these difficulties.

(with acknowledgements to Antonia Zachariou, PhD candidate, University of Cambridge). Children’s innate musicality and love of rhythm and rhythmic movement is also illustrated. Even in the womb, during the last months of pregnancy, the fetus responds to musical sound. From as early as birth, infants possess impressive listening skills, an excellent memory for music and an interest in expressive musical performances, to such a degree that their musical skills have, in some regards, been shown to outperform those of adults. Trehub (2007) has reviewed this evidence and gone so far as to describe infants as ‘musical connoisseurs’. Certainly, they are very positively disposed towards music, showing a very early preference for songs directed towards them compared with speech.

In addition to ensuring that infants are enthusiastic movers and dancers, which clearly contributes to their development of physical co-ordination, this early love of music and rhythm appears to be an important evolutionary adaptation supporting early communication skills and social interactions. Malloch & Trevarthen (2009) review the evidence of the importance for early development of emotionally warm and rhythmical ‘protoconversations’ between mothers and infants in the first few months of life. Here, universally across cultures, as mothers speak, sing, pull faces, bounce and swing their infants and express feelings towards them, infants are observed to respond with synchronous vocal, bodily and gestural rhythmic patterns. The human body is governed by a whole system of circadian, metabolic and other biological rhythms, and young children’s enthusiasm for rhythmic movement is part of the development of brain structures governing these, as well as underpinning their developing physical abilities.

Physical play starts in babies. It’s simple at first as babies kick their legs and wave their arms in a rhythmic way helping the muscles ad nerves to develop and mature. At this stage adults often encourage physical play by bouncing and throwing babies in the air. As they become mobile what’s called exercise play soon develops. It comes to include a great variety of forms and each is beneficial in different ways.

Gross motor play involves large muscle movements and full body co-ordination, it includes things like jumping, bike riding, climbing, rough and tumble, running and chasing. By the time children are 4 or 5 they typically spend about 20% of their time playing in a physical way. Most of these activities can be done alone, but usually happen in a social environment where children are playing and learning from and with another child or adult.

Research shows that playing in a physical way is the main way that children learn and benefit from physical activity.

Evan’s getting really out of breath but is so engrossed in his game that he doesn’t stop running.

Children need to have good control of their bodies and those that do tend to be confident and have high self esteem.

Children instinctively seek out physical activities that their body and brain need to develop optimally.

The brain is gradually building up a body map. It needs to know where the limbs are, where the body ends, what the muscles feel like under pressure, how it feels when it’s moving and in different positions.

Children love being thrown into the air, going upside down, spinning and rolling and balancing along things. All of these kinds of movements develop their sense of where the body is in space. It’s known as the vestibular sense. By the time were adults this sense is usually fully developed so activities like this may fell unpleasant. It’s the disorientated feeling that is helping the visual system to connect up with balance.

Movements like pushing, pulling and lifting put the muscles under pressure. Jack prizes his body upwards and messages are sent to the brain so that it learns what it feels like. It also lets him know where the parts of his body are in relation to each other and the floor. Oskar’s brain will be receiving messages from his muscles as it learns where different sets of muscles are and how they feel when they’re under pressure. These types of movements are developing the proprioceptive sense.

The stimulation of these senses together with the visual and tactile senses lead to the brain being able to build up this detailed body map that’s needed for competent physical activity and especially for learning new physical skills.

Musical processes are inherent in the human brain, and rhythms are associated with movement. As we’ve seen babies love being bounced and together with the rhythm of song it provides a powerful stimulation for rhythmic movement. This inbuilt musicality and response to musical sounds develops into dancing and music making. It’s a basic human bonding mechanism that encourages more and more specific skills as the boys try to emulate what they see. Dancing involves using additional areas of the brain than other physical movements as children learn to synchronise their movements with the music as legs are moved through particular patters in space. As Orson learns his complicated dance routine sophisticated neural structures are brought into play.

Gross motor development then, is essential for healthy physical development, motivating children to build up their endurance and physical strength. At the same time the variety of movements develop the proprioceptive and vestibular senses and the brain builds up a body map. The innate musicality stimulates the brain in different ways as neural pathways become defined. All in all this play enables children to become confident and happy in the use of their bodies. 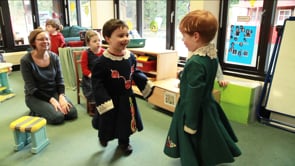 How can adults support physical play? 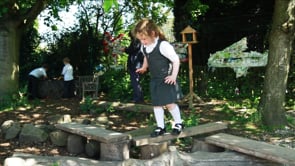 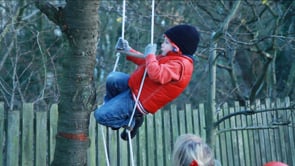 Why do children takes risks in physical play?