Why are interactions so important?

In this video we examine how experience directly affects brain development and look at the crucial role the primary carer has in shaping this development. We look at a baby’s developing emotional intelligence and how the Mum supports this development as they play and communicate with one another. Dr. Maria Robinson explains the physiological brain development that is taking place during these integral interactions.

Transcript of video – Why are interactions so important?

Orson’s relationships and communications are advancing rapidly and this is affecting his developing brain. The interactions he has influence the neural connections made and these are now being made at a massive rate, particularly in a part of the brain called the pre-frontal cortex. This area of the brain deals with more advanced behaviours including managing emotional behaviours and responding to the emotional cues of others. So it’s really important for social situations allowing Orson to understand others more clearly and to adjust his behaviour to fit the situation. Its development is most rapid from about 6 months to 2 years and is almost entirely dependent on experience.

Mum’s interpretation of his expressions and vocalisations really help the development of this prefrontal cortex. The way she interprets his behaviour influences his response. Rather than smiling at any adults face, smiling has now become specific and personal and is now a response to communicate a pleasurable emotion. Orson can now laugh. It begins as a cross between a frightened cry and a smile. When mum throws him in the air, he sees that she’s smiling and is to be trusted. So the wail combines with smiling to produce a laugh.

The game of peek-a-boo involves mums disappearance and sudden reappearance. The suspense and surprise can be both exciting and upsetting. Orson squeals with delight. The repetitive nature of the game encourages turn taking mum hides and appears, Orson responds and then they repeat the sequence. This is also the way conversations work. Playing games is an excellent way for Orson to learn.

Watch how mum copies Orson’s position so letting him know that she’s very interested in what he’s doing, at the same time as smiling and talking about it. She’s mirroring him physically and emotionally. As Orson struggles to stand, mum’s voice goes lower, then raises when he succeeds. Her sensitive reactions to him, corresponding with his own behaviour, help make him feel understood.

‘Through interactions, through playing games, babies can have these lovely feelings. The chemicals in the brain that are to do with positive feelings almost bathes the whole brain in it and actually it helps forge these really positive connections through all the parts of Orson’s brain and for any baby really these particular sorts of interactions are so important to them so they get to know the feelings which are positive feelings and they’re the ones that they begin to relate to their experiences and helps them begin to understand what their world is like. It’s not going to be all positive of course, but what you hope is that most of the time Orson, and other babies, are going to be receiving positive communications in response to the way they’re reaching out to their carers.’

As well as hearing the sounds and intonations that mum makes he’s now experimenting with more sounds himself. As we’ve seen, his babbling started with vowel sounds, now he’s beginning to use consonants. He makes BA BA sounds and mum repeats them. At this age there’s lots of games that mum can play with Orson to encourage his communication further. He likes musical rhymes and this together with his increasing control over his body makes this very exciting for Orson. He’s enjoying the way mum plays with him so much that he’s learned how to tell mum that he’d like to do it all over again. She gives him plenty of time to answer and take the initiative.

It’s the repetition, rhythm and rhymes of the games, the pitch of mum’s voice and her expressions, the excitement and anticipation of what’s coming next that makes these interactions interesting to Orson, motivating him to listen and join in. The linking of all modes of communication – vocalisations, eye contact, gestures, facial expressions and actions all come together for Orson as he takes in the emotional feel of the interaction. Information from all of these experiences arrives in the brain at different speeds, emotional information being processed faster than cognitive. These games are helping him to get the whole picture and understand how more complex interactions work. The connections Orson makes, help him to bring together his own modes of communication. When Orson lifts to sitting he remembers a game he’s played before. He moves back and forth and mum realises what he wants. 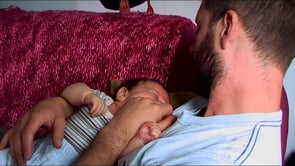 What happens when the babies cries are responded to quickly? 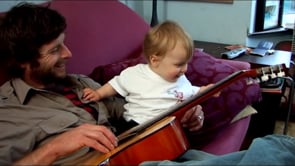 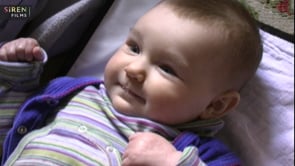